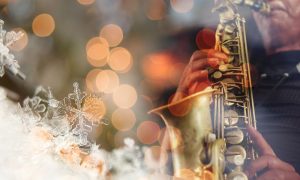 The winds have chilled, the leaves fallen from trees, and the days grow shorter. With the holidays around the corner, it’s a perfect time to huddle up indoors with blankets, hot chocolate, and great jazz records. As we approach the end of the year, we look back on a year filled with fantastic new albums and begin to look ahead at upcoming releases in the months ahead.

Despite the recording challenges presented by a global pandemic, 2021 nonetheless saw the release of several excellent big band recordings. Standouts include Daring Mind from the Jihye Lee Orchestra and Soundscapes from Bob Mintzer and the WDR big band. Daring Mind is just as its title implies: a daring new implementation of big band forces by young composer Jiyhe Lee that features incredible harmony, interesting counterpoint, and unique structural forms. Veteran saxophonist Bob Mintzer has been the chief director of the German-based WDR Big Band for many years, and their release of Soundscapes, an album composed of all Mintzer originals, extends the band’s tradition of celebrating the original music of their directors. Stacked with marvelous music from top-to-bottom, Soundscapes features a variety of colors and styles, with some impressive solos from several band members, as well as Mintzer himself.

Veronica Swift is a new vocalist to arrive on the scene in 2021, her debut album This Bitter Earth boasting not only sophisticated and well-versed vocals, but backing and arrangements from some of New York’s hottest jazz talents, like arranger Steven Feifke and pianist Emmet Cohen. This month also marks the release of the first-ever holiday album by jazz songstress and fan favorite Norah Jones. I Dream of Christmas will be a welcome addition to everyone’s jazz collection this season and is sure to be a perennial holiday favorite for years to come.

Not to be outdone, many veteran artists continued to plumb the depths of their creativity in 2021, with releases like Tone Poem from Charles Lloyd and The Marvels and Samba de Maracatu from Joe Chambers, only his second album as a leader after a recording career spanning more than five decades! Even in the last few months, we’ve heard thrilling new music from Kenny Garrett and Pat Metheny. Garrett’s new album Sounds of the Ancestors not only pays tribute to celebrated jazz icons like Art Blakey and Roy Hargrove, but also honors the musical and cultural contributions of black Americans going back to 1619. Pat Metheny’s latest effort, Side-Eye NYC (Vol.1.IV), is yet another in a long line of stellar trio albums he’s released throughout his career, a live album that is both commemorative and forward-looking with Metheny classics like “Bright Size Life” and “Timeline” reimagined and reinterpreted by Metheny, James Francies, and Marcus Gilmore.

We all have delighted in experiencing and sharing all this wonderful new music with you all year long. With the year coming to a close, we fondly reminisce on the excitement we felt hearing these for the first time and look forward to indulging in them further throughout the season and into the future. As you settle in for this cozy season, you can always hear both classic takes and new favorites alike, and we invite you to enjoy new discoveries with us throughout the year on Jazz 93.5!